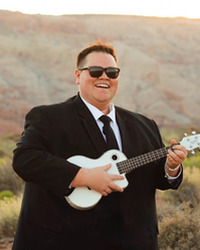 The band was warmed up and the stage was set. Joey “Forte” Acosta stood at the front of the main stage in the Eccles Building ready to sing his first notes of the beloved tune “Love” By Nat King Cole. “In that instant I knew what I wanted to do for the rest of my life” Joey said.Now 27, Joey Forte is pursuing and succeeding in his dreams of becoming an international musician. With his first debut song in November, he has had listeners from all over the world that range from California to Azerbaijan.

“I knew I had to create not only good music, but also a community to be part of.” Starting in 2017, Joey started crafting ideas for logos, websites and designs. He then started gaining momentum after selling jingles to companies such as Faith, Trust, and Pixie Dust for Lu La Roe Clothing and Dixie State University. Now he is the main singer for the Rebel Jazz Band of Southern Utah and is being featured on the Lauten Audio Series for upcoming musicians.

While there were multiple factors that influenced Joey’s career, Dixie State University ultimately jump-started his journey to success. Joey started getting involved at Dixie State University by joining and becoming President of the Dixie State Spirit group, The D-Crew. He also was first chair in the Herald Trumpeters, Jazz, and Symphony Band. Soon after he became a Mascot called the “The Man” where he would pass out candy and lead cheers at the football and basketball games.

In 2015, Joey was awarded the Dixie Spirit Award for encompassing the values Dixie State holds. He then graduated Class of 2015 with a Bachelors in Business with an emphasis in Marketing.

“All my experiences at Dixie helped direct me to where I am now. I owe a lot of my success to the wonderful people and mentors at the school.” Currently Joey Forte is releasing his Christmas single, “Naughty List for Life” on Dec 1! He says, “With the way the year has been, we all need a little fun music to start the season off right!” His music can be found at joeyfortemusic.com